We need to talk.

Why is it that when I say “I’m a lesbian,” you guys hear it as a challenge, rather than a fact? My preferring women doesn’t take away your chances of getting with straight or bi women. It doesn’t magically take away points on your Scale of Manliness. It’s a statement of my identity, or a reason as to why I would not like your number, or a point that comes up in conversation. It’s a part of who I am, a part of my identity, and yet straight men treat it as if it’s negotiable or as if I’m too stupid to possibly know what I like.

Well, I’ve had enough. I’m tired of having the same arguments over and over again with men.
So, since apparently it hasn’t been made clear to you guys, here are a few things that the statement, “I am a lesbian,” does not mean:

You are not better than a woman in bed, simply because you are a man. My sexuality is not negotiable, it is not a challenge for you to take on and conquer. I am a person, and this is my identity. Why, in your mind, does validating that or simply accepting it, hurt your fragile ego so damn much? We just want to exist without being harassed or constantly having to defend who we are because you refuse to hear it for what it is.

So, I drive for Lyft almost full-time, which for those that don’t know, is a company similar to Uber but smaller and *cough* better *cough*. It’s a pretty sweet gig most of the time and after doing it for almost 2 and a half years, I don’t have many complaints. That doesn’t mean that driving strangers around doesn’t come with its own set of um, let’s call them interesting, experiences.

For instance, there was the time I had to drive a guy to meet his probation officer. Totally normal, right? Except that during that ride, the guy proceeded to tell me that he’d done meth before getting in the car, his brother in law was head of the KKK chapter in Indiana, and he’d kill a guy twice. The same guy. Twice.

Another guy spent the entire 15 minute ride from the airport to his hotel mansplaining how Lyft and Uber worked to me, a veteran driver of, at the time, both companies. I think my eyes almost popped out of my head from the control I had to exert to keep from rolling them the entire time.

There was also the time I almost ran over Jesus, who in my defense, was carrying his cross in the middle of the road. You would think he’d know better, but apparently his disciples didn’t feel the need to tell him how traffic worked. Okay, it was some kind of demonstration thing happening over Easter and I’m not religious, but regardless, running over Jesus has got to be bad karma.

I just realized that all of these stories are about guys. I feel like that’s not a coincidence, but to be fair, I’m sure I can dig up at least one time a female passenger did something crazy….
Okay seriously, I can’t think of any other than the story below. Or the time I almost hit Jesus. Most of the time, in my experience, the girls either don’t talk at all, ramble on about their family or current work problems, or they’re so excited to have a female driver that we just chat about whatever comes up the whole time.

Anyways, that just leaves my favorite story of all time….
The exorcism.
It started out pretty normal when I went to pick up a group of people from a wedding in downtown Indy. Their hotel was only about 10 minutes away so it should have been an easy ride. Except that one of the girls in the group was so drunk that she wouldn’t stop making this weird keening sound like some kind of wounded coyote. I’m pretty used to driving drunk people so I just tuned her out. However, about halfway through the ride, the guy sitting next to me swung around in his seat to face the girl.

“I’ve had enough of this shit! We’re gonna exorcise this bitch!” (I’m not even kidding, I couldn’t make this stuff up.)

He then proceeded to pull a Bible out of the bag he was carrying and flip through it, looking for the appropriate page. (The fact that he had a Bible with him implies this was premeditated, right?)

The other two friends in the group didn’t say anything as the guy undid his seat belt, turned all the way around, and started reading a passage from the good book. It did nothing to stop the girls whining.

Luckily by that time, I’d pulled in front of their hotel.
“You want to come up and help us finish this exorcism?” The guy asked me, totally straight faced.

I’d be lying if I said I didn’t consider it. I mean, who isn’t a little morbidly curious about watching an amateur exorcism of a drunk girl who, as far as I knew, had previously been showing signs of possession. But alas, I mumbled something about having to get back to work.

The guy nodded, shut the door, and then helped his friends carry the allegedly-possessed girl out of my backseat.

I still semi regret not watching how that played out in their room afterwards….

My biggest fear is that I’ll make this huge change, go on this huge journey, and nothing will be any different. I’m scared I won’t find any friends or make any connections, and I’ll be left just as alone and isolated as I feel here. And I’m scared of what would happen to me if that fear was realized.

Luckily, thanks to one of my favorite authors and bloggers, Jenny Lawson, I know that DEPRESSION LIES. So I’m doing what I can to keep my head above water and not let the bad thoughts win.

It may seem silly, and of course everyone is different in how they handle self-care, but here are some of the things I do when I feel like the darkness creeping in and need to push through it for just one more day:
1. I listen to or watch stand up comedy. – It’s impossible to stay in a bad mood while laughing hysterically….some of my favorites are Kevin Hart, Jen Kirkman, Sarah Colonna, and Jim Gaffigan.

2. I read things by people who understand what I’m going through. – My go-to books on anything mental health related that can also make me smile are Furiously Happy, by Jenny Lawson and Agorafabulous, by Sara Benincasa.

3. I do something that makes me smile. – This is a little more broad and can be anything from going to see the new Fantastic Beasts movie to exercising my petty side and putting “Love Trumps Hate” notes in all of the Ann Coulter books at Barnes and Noble.

4. I reach out. – I’m still not very good at this one. Depression tells you that you’re not good enough or important enough to talk to others. It makes you think no one cares and tells you that you’re burdening these “normal” people with your messed up brain. But that isn’t the case. There are people out there, that genuinely care about you and want to help you through what you’re dealing with. I am lucky enough to have two people who know exactly what I’m going through. I can talk to them about my darkest thoughts or my silliest ideas, and they know they can do the same with me.

Like most people, while watching the new Fantastic Beasts movie, I found myself vehemently wishing that I too was a wizard. Most of us who grew up reading Harry Potter are familiar with this feeling, having often dreamed of the day when Hagrid would show up at our doors, declare us too special for our average lives, and whisk us away to Hogwarts.

However, as I watched this gorgeous movie play out in front of me and took in the amazing world that had been first created by just one person’s imagination, I realized something.

Magic is absolutely, unquestionably real. It’s in the world around us every day, in the movies we create, the words we write, the pictures we paint, and the stories we tell. Magic is being used every single day when something is made from nothing but an idea. These creations then, in turn, inspire others to excercise their own art, and let loose their own magic.

Just as Harry Potter has given so many people comfort and hope in their lives, the magic that comes from seemingly ordinary people is capable of making us feel every emotion on the human scale. Each piece of art or creative mind is capable of carrying us through the hardest times we face, unable to be extinguished by things that plague are world.

We are creators, artists, magicians, and yes, even wizards. So, as it turns out, we aren’t muggles after all. 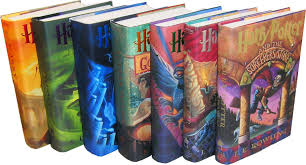